Testing for an iOS project

Testing ensures the application is error-free while it still meets all the product functionalities and requirements. Testing helps verify that new code changes do not cause negative effects or unexpected behaviors of the application. Furthermore, it can check whether the defects are resolved or not.

Having a standard structure for the test suite is necessary as it will help keep the testing code consistent, maintainable and changeable corresponding to the project’s specifications.

Following the Levels of the Testing Pyramid from the Apple Developer website:

A good testing strategy combines multiple types of tests to maximize the benefits of each.

The project should include the three following test categories: 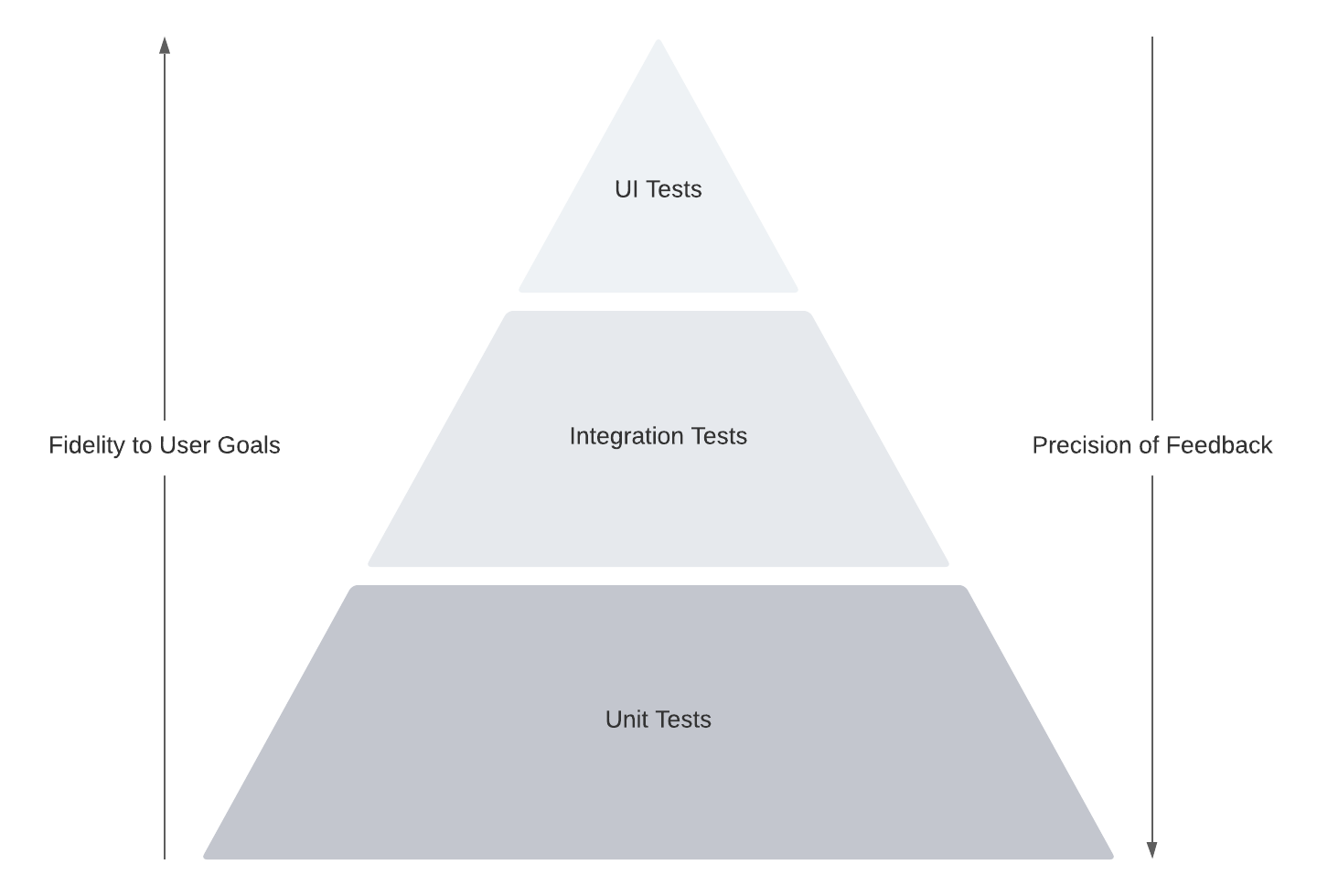 In an iOS Project, the application includes the three main test categories.

Unit testing is a level of software testing where individual units/components of a software are tested. The purpose is to validate that each unit of the software performs as designed.

Each unit test should assert the expected behavior of a single path through a method or function. To cover multiple paths, write one test for each scenario.

Integration testing is a level of software testing where individual units/components are combined and tested as a group.

The purpose of this level of testing is to expose faults in the interaction between integrated units.

As both integration tests and unit tests use the same APIs, the code of these two test categories is contained under the same folder Tests.

UI testing is a level of software testing where the UI is tested for acceptability. The purpose of this test is to evaluate the UI compliance with the business requirements for common use cases.

The code of UI tests is contained under the folder UI Tests.

There are some third-party libraries that facilitate writing tests:

It is recommended to remove <ProjectName> prefix from the default folder name. After removing the prefix, there are two folders to contains testing code:

Create UI tests to verify that critical paths in the user journey can be completed in the application. This ensures bugs, which can break the behavior of UI controls, cannot be introduced. UI tests replicating real user interactions provide confidence that the application can be used for its intended task.

When it comes to UI testing, there can be a huge number of scenarios and combinations in which the test cases may run. Technically, it is possible to test all of them. However, as it is not desirable nor pragmatic due to the time-consuming nature of both writing and executing the tests. Hence, the best practice is to have test case prioritization.

Test case prioritization is a technique of prioritizing and scheduling test cases. This technique helps to cover the test cases (from higher to lower priority) while minimizing time, cost, and effort during the software testing phase.

The aspects that impact the test prioritization are the following:

Use the following criteria to decide which test cases have higher priority.

Despite the prioritization of test cases, there might still be some test cases that are not eligible for writing UI Test.

After prioritizing the test cases, categorize them into test suites.

At the beginning, the test case can be a simple draft or with very few details. However, as the project expands and more requirements are appended, the test suites and test cases need to be scaled up or down. Such activities should be continuously performed throughout the product’s life cycle.

A test suite is a collection of test cases. In a test suite, the test cases are organized in a logical order.

A test case is a set of pre-conditions, procedures (inputs and actions), expected results and post-conditions. It is used to determine whether the application under testing meets the requirements.

Bear in mind that each test case in a test suite is dependent on the success of the previous test case. Hence, if User A does not add any product, then the user cannot check out.

According to the example above, some test cases reuse a sequence of test steps, but with adjusted input data. So while writing UI test scripts, it is recommended to define test flows and take advantage of them as much as possible.

During implementation of UI testing, it is important to define identifiers for UI components, so that the machine can distinguish between different elements. Use 2-level or 3-level domain naming scheme (useCase.description or feature.useCase.description). Use camel case instead of capitals or snake case to avoid ambiguity.

Although some general identifiers can be reused over the application (such as an identifier for back buttons, navigation bar, etc.), it is recommended to set distinctive identifiers inside each screen, which means there should not be two components having the same identifier within one single screen.

When defining a test flow, focus on providing an interface with input data. It is also suggested to verify whether the UI element is available for interaction before interacting with it:

A general test flow such as tapping a back button on a screen:

A sample test flow in the List Repo screen:

Make sure to cover the high prioritized test cases as much as possible when preparing test data and implementing test cases.

A simple test case in the List Repo screen:

Most of the time, UI testing waits for the result. Hence, it is recommended to write testing code asynchronously. It is crucial especially when working with XCUIApplication. Whilst with KIF, since the KIF facilitates some workload, then writing asynchronous testing code is not the centerpiece.

Check the sample in this repository nimblehq/viper-demo.