Testing for an Android project 🔎

Testing is an essential part of the software development lifecycle, Android development is no different. With automated or manual testing being applied to the testing phase, it can help detect unexpected behaviors or application failures in development or different environments. Furthermore, the high percentage of test coverage in the projects also improves maintainability and enhances applications before releasing publicly.

Following Levels of the Testing Pyramid from the Android developer site, the application should include the three following test categories: 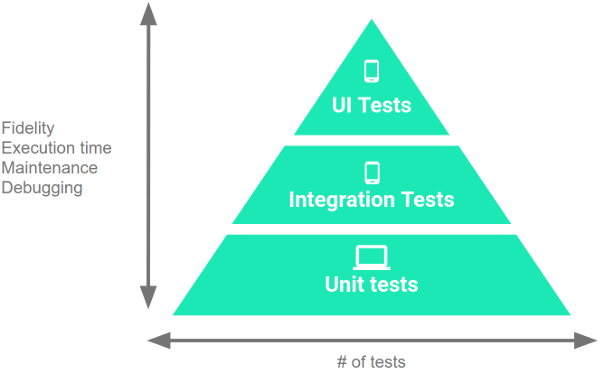 These definitions are recommendations from Google; the distribution of the test pyramid will depend on the need of the current project.

These tests focus on method invocation assertions and can run on local JVM or simulated devices (such as Robolectric).

These tests focus on user interaction assertions and can run on the following types of device:

Instrumented Tests for Android can be classified into:

Based on the current development projects, which are applying MVVM architecture, Unit Test should cover the following components/packages:

It’s easier to start with writing test cases on this layer. OkHttp provides MockWebServer to test requests and responses from specific endpoints.

UseCase is the contact point between Repository and ViewModel, so the test from bottom to top layer is the best approach.

ViewModel will handle most logic, so it’s important to have test cases for this layer.

The main point of the test case for the UI layer is to verify the features are working as expected with the user’s interaction.

We apply testing to the Service part to ensure that it doesn’t have unexpected behaviors.

With Instrumented Test, developers should trade-off between project timeline and test coverages because writing and executing Instrumented Test requires much time and effort. Projects with Unit Tests applied on isolated parts are good enough and also acceptable. From the developer’s viewpoint, we should focus on Unit tests; SIT and UAT phases are the best places to detect and clean up unexpected failures on integrated parts in the development phase.

When creating a new project, Android Studio creates the test source sets for Local Unit Tests and Instrumented Tests. Their test classes will be located in the directories (test or androidTest), depending on the type of test.

Include the test condition and expected behavior with the <When> _ <Expect> _ convention.